Admittedly, we do our best to ignore the day-to-day political noise. However, the Stormy Daniels v. EC, LLC and/or Donald Trump saga has illustrated — and will continue to illustrate — some of the many flaws of forced arbitration.

How come an LLC that was not a party to the arbitration agreement was allowed to initiate an emergency arbitration?

The Agreements and Procedural History

For simplicity, we will refer to Stormy Daniels as Stephanie Clifford.

There are three parties to the Agreement and Side Letter:

On or about February 27, 2018, in response to an emergency request by EC, LLC to the arbitration firm ADR Services, Inc., arbitrator Hon. Jacqueline A. Connor (a retired judge) issued an emergency restraining order against Ms. Clifford.

You can review a copy of the restraining order here.

"[Ms. Clifford] further acknowledges and agrees that any breach or threatened breach of this Agreement due to the unauthorized disclosure or threatened disclosure by [Ms. Clifford] to Third Parties, of any Confidential Information shall entitle [Mr. Trump] to immediately obtain, either from the Arbitrator and/or from any other court of competent jurisdiction, an ex parte issuance of a restraining order and preliminary injunction or other similar relief (herein "Injunctive Relief") without advance notice to [Ms. Clifford], preventing the disclosure or any further disclosure of Confidential Information protected by the terms hereof pending the decision of the Arbitrator or Court. [Emphasis Added]

The Agreement allows for a restraining order "without advance notice to Ms. Clifford."

Given the Agreement names Mr. Trump in Section 5.1.3 and not EC, LLC, was it proper to grant EC, LLC's emergency request? Is it even valid?

Section 5.2 of the Agreement says:

In recognition of the mutual benefits to [Mr. Trump] and [Ms. Clifford] of a voluntary system of alternative resplution which involves binding confidential arbitration of all disputes which may arise between them, it is their intention and agreement that any and all claims or controversies arising between [Mr. Trump] on the one hand, and [Ms. Clifford] on the other hand, shall be resolved by binding confidential Arbitration to the greatest extent permitted by law. [Emphasis Added]

Once again, the arbitration provision of the Agreement only names Mr. Trump and not EC, LLC. If it intended for EC, LLC to have these powers, why didn't the Agreement state as much?

We suspect EC, LLC has not filed a Motion to Compel Arbitration because it knows it can't.

We also suspect this is why Mr. Trump filed a Joinder adding himself to the case on March 16, 2018.

Indeed, the Joinder says, "Mr. Trump intends to join in EC’s anticipated Petition to Compel Arbitration under the Arbitration Agreement."

Can Mr. Trump — who never executed the Agreement or Side Letter — compel arbitration?

Unfortunately for Ms. Clifford, the mere existence of an arbitration provision means the court is highly likely to force her claim to arbitration.

The arbitration provision states, "...any and all claims or controversies ... shall be resolved by binding confidential Arbitration..." This broad definition is typically interpretted by courts to include claims for declaratory relief.

Under similar circumstances (does an agreement even exist), Wells Fargo has been able to force "customers" that had accounts fraudulently opened in their names to arbitration. See here and here.

So, we predict Ms. Clifford's claim will be forced into arbitration, either immediately or on appeal.

Mr. Trump and his counsel will undoubtedly claim this as a major victory but we have our doubts.

If a court would find the Agreement invalid and unenforceable so should an arbitrator.

And once the arbitrator finds the contract invalid, the claim should be allowed to return to court — because there is no arbitration agreement.

In the event that the arbitrator decides against Ms. Clifford, there are only a handful of reasons a court can overturn an arbitrator's decision. They can be found in Section 10 of the Federal Arbitration Act.

In our view, the fair move would be for an arbitrator to declare the Agreement invalid and unenforceable and return the claim to court. This would allow the courts to send it back if they disagree — which we doubt they will.

She appears in the Level Playing Field database once. (We will add the ADR Services, Inc. data soon.)

She has completed 41 cases for ADR Services, Inc. as follows: 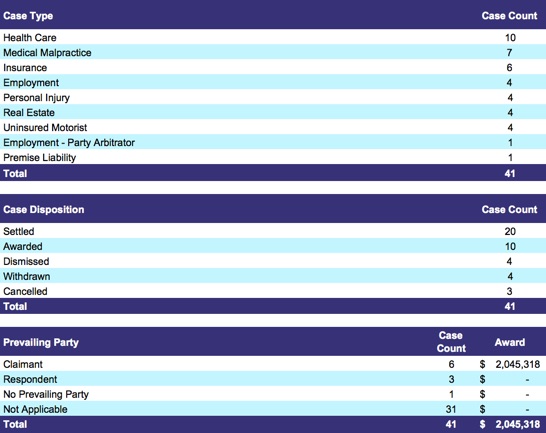 Ms. Connor seems to have a balanced track record. However, she did just grant the questionable emergency restraining order.

Moreover, according to OpenSecrets.org of the Center for Responsive Politics and FEC records, she is a Republican donor. She supported John McCain in 2008 and Martha McSally in 2012.

Again, this will be interesting to watch. It highlights the fallibility of arbitrators and arbitration as well as many of the procedural traps created by the courts to force every question into arbitration.

Why do courts risk an awful decision by an arbitrator with limited options for appeal?

Will Ms. Clifford get a fair result?

We are Level Playing Field 501(c)(3). Nearly all of our work is performed on a volunteer basis. To support our work, the continued build out and maintenance of the arbitration database and community, please support us on Patreon (even one dollar a month helps) and contribute your knowledge and experience to the forum.

This is not legal advice.

Get the latest posts delivered right to your inbox.

Is the AAA manipulating its arbitration case data?