California moved one step closer to ending the the practice of mandatory arbitration in the workplace as State senators voted to approve Assembly Bill 3080.

Introduced by Assemblywoman Lorena Gonzalez Fletcher (D - San Diego) back in February the proposed bill would prohibit employers from requiring mandatory arbitration as a condition of employment, continuing employment or receiving employment-related benefits. Speaking in support of her bill Gonzalez Fletcher issued the following statement, "We know that workers across California constantly experience sexual harassment, wage theft, and other abuses in the workplace and that these abuses are often never brought to justice because employees are forced into secret and one-sided mandatory arbitration agreements at the time they are hired."

Companies would also be banned from limiting the ability of employees, job applicants and contractors to share information about sexual harassment at work or from requiring nondisclosure agreements related to sexual misconduct as a condition of getting or keeping a job. It is important to note tht AB 3080 not only applies to employers but also to any “person” who commits any of the above-noted violations and would make make it a misdemeanor criminal offense.

The bill now moves on for approval from Governor Jerry Brown, who had previously vetoed a similar bill in 2015.

“Sexual predators will no longer be able to use the secret setting of arbitration to keep their misconduct hidden. In some cases that secrecy has allowed serial abusers to continue their conduct for years.”

The bill grew largely in response to the #MeToo movement as supporters seek to end the practice of arbitration in the workplace preventing victims of sexual harassment and discrimination from having their day in court and being able to go public about their experiences.

Womens rights activists rallied in support of the bill earlier this month at a panel discussion in the state capital. Among prominent attendees was actress Jane Fonda who stated emphatically, “We are fighting now for the structural change that can make systemic change…I think we have to keep talking and fighting…Governor Jerry Brown needs to sign this legislation (AB 3080). This is the time! This is the moment to protect women.” Susan Fowler, a former Uber engineer who’s claims of sexual harassment at the popular ride-sharing company in 2017 gained international attention and led to the eventual ousting of CEO Travis Kalanick, has also come out in support of AB 3080 dispelling the “widespread and sinister” nature of mandatory arbitration. Additional organization backers include the California Labor Board, SAG-AFTRA, and Consumer Attorneys of California who issued a strong statement about the consequences of mandatory arbitration in the workplace saying, “sexual predators will no longer be able to use the secret setting of arbitration to keep their misconduct hidden. In some cases that secrecy has allowed serial abusers to continue their conduct for years.”

Opposition to the bill is led by the California Chamber of Commerce who successfully lobbied Gov. Brown to veto the previous bill in 2015 by labeling it a “job killer” and is employing similar tactics this time around saying of AB 3080, “it will create more litigation, significant delays in the resolution of disputes, and higher costs for employers and employees.” They are also quick to point out that they believe the bill would be preempted by the Federal Arbitration Act arguing that it will result in significant litigation without providing any of the intended benefits to employees.

In a recent blog post The Business Journal echoes the Chamber’s support of mandatory arbitration in the workplace, “Studies generally demonstrate that employees generally win the same percentage of cases in arbitration, if not more, according to the Calchamber. But outside of arbitration, trial attorneys may not recover as much in fees. So it seems like the trial attorneys may ultimately benefit from this law.” Neither the California Chamber of Commerce or The Business Journal provided sources of such studies.

“California has long been viewed as a state where mandatory employment arbitration is especially common, a consequence of employers reacting to the relatively employee-protective environment of that state’s employment laws by using mandatory arbitration to opt out of being subject to the state court system.”

California seems particularly ripe as a battleground over mandatory arbitration in the workplace. According to a 2017 study by the Economic Policy Institute over 67% of private sector employees in the state are now subject to signing arbitration agreements as terms of employment whereas the national average is 53.9%. 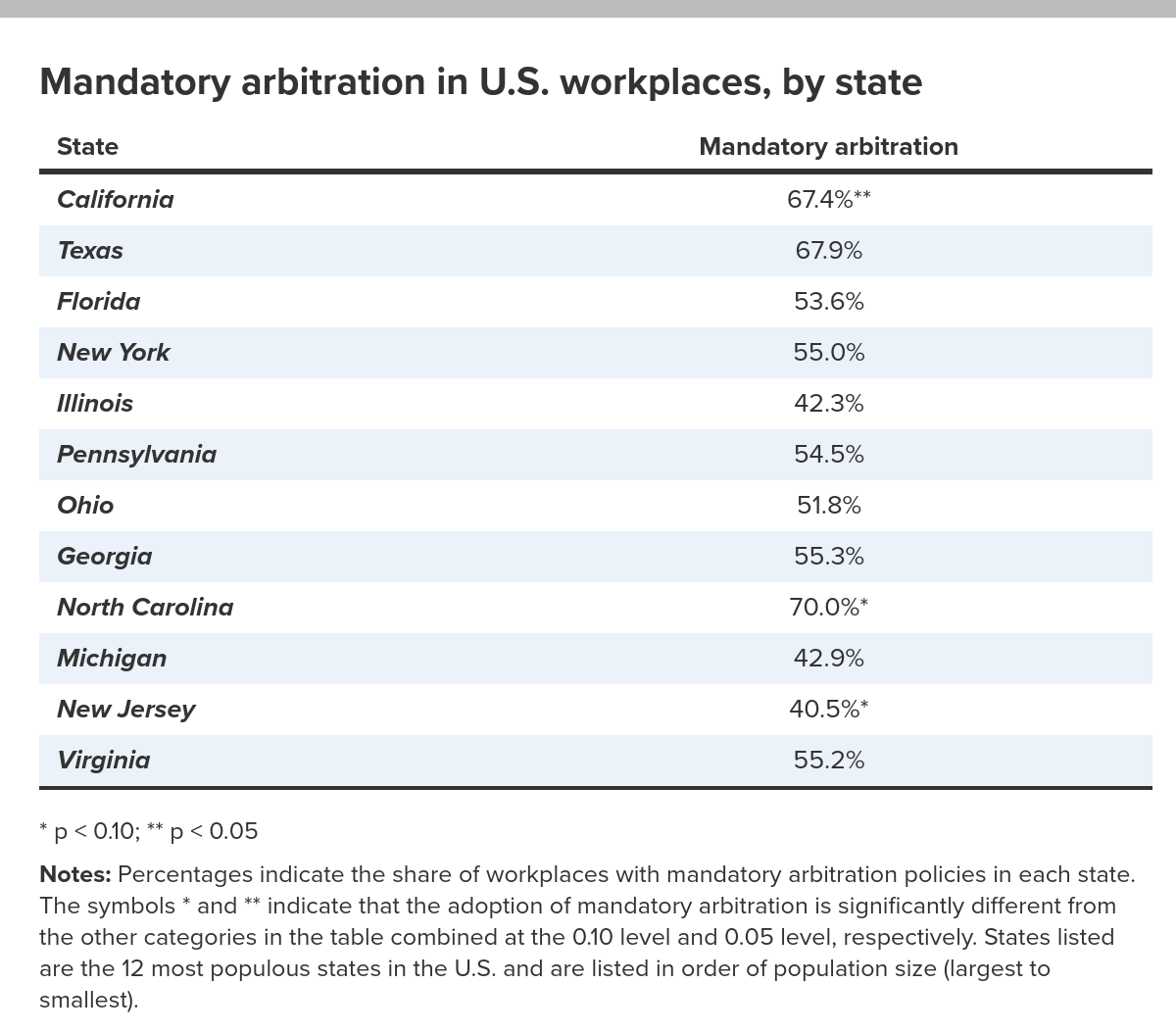 It remains unclear whether the recent decision by U.S. Supreme Court, which upheld the legality of workplace arbitration agreements barring employees from filing class-action lawsuits against their employers, would impact the ability of the state to enforce the bill if the Governor signs it into law.

Gov. Brown now has until September 30th to sign or veto AB 3080. If signed, the new law would apply to any employment contracts “entered into, modified, or extended” on or after January 1, 2019. California residents wishing to contact the governor's office in support of AB 3080 can find that information here.

We are Level Playing Field 501(c)(3). Nearly all of our work is performed on a volunteer basis. To support our work, the continued build out and maintenance of the arbitration database and community, please support us on Patreon (even one dollar a month helps) and contribute your knowledge and experience to the forum.

Get the latest posts delivered right to your inbox.

I beat Citibank in forced arbitration and so can you.

You can win. There are lawyers out there that don't run away from arbitration agreements. In this series, Dan walks you through how he did it.…